For fans of professional golf, there is one player that the modern game owes everything to. Yes, Arnold Palmer brought swagger to the game, and Jack Nicklaus certainly redefined what it meant to be dominant in the sport, but before either of them hit the scene there was one man demonstrating a level of skill that to this day remains legendary.

Ben Hogan played the game of golf as well, if not better than it had been played before or since. His focus, willpower, and unquestionable talent earned him a slew of tournaments that will keep his name in the records forever.

Perhaps even in more significant, Ben Hogan demonstrated one of the most remarkable come backs in the history of sports. Today we will be taking a look at this incredible player’s life.

Ben Hogan was born in Stepenville Texas in the year of on August 13, 1912, to parents Chester and Clara. Unfortunately, tragedy struck home for young Ben Hogan at an early age when his father took his own life at home.

This tragedy would ultimately deprive Hogan of his childhood. After Chester’s passing the Hogans encountered financial struggles that would require the three children to take jobs to help their seamstress mother maintain the household.

When Hogan was eleven he would take a job as a caddy at a local country club where he would learn the game of golf, and even establish a friendly rivalry with tour legend to be, Byron Nelson, who was also working as a caddy at the club.

Hogan would ultimately master the game very quickly, dropping of high school at the age of seventeen, just several months short of his high school graduation in order to turn pro at the Texas Open in the year of 1930.

Though there is no denying that Hogan was a great talent the early years of his career were a great struggle, to the point that he had to take a low paying job as a teaching pro to pay the bills.

For ten years, Hogan would fight a severe hook that would that would keep him from securing a victory. Things were not all bad, however. During these tumultuous years of his career he met his wife Valerie while working as a golf pro.

The couple would marry in 1935 and Valerie would stand by him even during times of great financial difficulty that would see their family go broke three times.

Of course, things would eventually work out. Hogan cured his hook, and in the year 1940 he would win three consecutive tournaments.

As famous as Hogan is for his tremendous skill and his many wins, he is perhaps equally well known for making one of the biggest comebacks of all time.

In 1948 Hogan was involved in a life-threatening head on car accident with a Greyhound bus that would very nearly take his life.

At impact, Hogan threw himself over his wife to protect her from the crash. In the process, her life was saved but his was put into even greater danger as the steering column came into direct contact with his torso.

The car accident would leave Hogan with a double-fracture of the pelvis, a fractured collar bone, a left ankle fracture, a chipped rib, and near-fatal blood clots. The diagnosis was quite severe: not only was Hogan never expected to play golf again, but there was a very good chance that he wouldn’t even be able to walk.

Of course, that isn’t what happened. Fifty-nine days after the accident Hogan walked out of the hospital.

The road to recovery was long and difficult, but after extensive physical therapy Hogan made his return to the tour in November of that year, where he would tie for the lead in the Los Angles Open, but ultimately lose in an eighteen hole play off to his tour rival Byron Nelson.

The greatest season in golf

There have been many great seasons in professional golf, but few if any can match Hogan’s 1953 season during which he would win five of six tournaments that he entered, including three majors (The Masters, U.S Open, and British Open).

This feat is now known as the triple crown in golf and has been accomplished only one other time by Tiger Woods in 2000.

That season Hogan was not even eligible to compete in the PGA Championship to complete the single season grand slam because it overlapped with the British Open.

Post car accident, Hogan would routinely miss the PGA championship both because the match play format did not fit his strategy, and because many days would require thirty-six holes of play which was very difficult for him to do after his injuries.

Despite the fact that Hogan was only able to enter into six tournaments that season, it remains a landmark achievement that few golfers are ever likely to match.

Hogan would slow down significantly in the sixties but would remain a presence in the game of golf until his death in 1997 at the age of 84.

Ben Hogan is a legend for more than just his famous golf swing, or his many victories. Few athletes of any sports have overcome more to play their game than Ben Hogan.

The man was more than just a champion, he was a courageous respectable man that set a standard for professional golf that endures to this day. Between his hard work, his service to his country, and his selflessness in risking life for that of his wife one thing is clear: Ben Hogan was one of the great gentlemen of the gentleman’s game.

As you walk down the fairway of life you must smell the roses, for you only get to play one round.

Every day you miss playing or practicing is one day longer it takes to be good.

Golf is not a game of good shots. It’s a game of bad shots.

I always outworked everybody. Work never bothered me as it bothers some people.

The average golfer’s problem is not so much the lack of ability as it is lack of knowledge about what he should be doing.

There is no similarity between golf and putting; they are two different games, one played in the air, and the other on the ground.

A shot that goes in the cup is pure luck, but a shot to within two feet of the flag is skill.

I don’t believe there is anything like a natural golf swing. A golf swing is an unnatural thing, and it has to be developed.

You never fight your eye when you look at a hole. If it looks one way, play it that way. Don’t make a big deal out of an easy shot.

Reverse every natural instinct and do the opposite of what you are inclined to do, and you will probably come very close to having a perfect golf swing.

The most important shot in golf is the next one.

You wouldn’t have had to call a penalty on me, I would’ve called I on myself. I’m the sole judge of my standards.

I liked to win, but more than anything, I loved to play the way I wanted to play.

Selecting a stroke is like selecting a wife. To each his own.

I learn something new about the game almost every time I step on the course.

If you can’t outplay them, outwork them.

Your name is the most important thing you own. Don’t ever do anything to disgrace or cheapen it.

You hear stories about me beating my brains out practising, but the truth is, I was enjoying myself. I couldn’t wait to get up in the morning, so I could hit balls. When I’m hitting the ball where I want, hard and crisply, it’s a joy that very few people experience.

I play golf with friends sometimes, but there are never friendly games.

There are no shortcuts in the quest for perfection.

The only thing a golfer needs is more daylight.

I never played a round when I didn’t learn something new about the game.

Placing the ball in the right position for the next shot is eighty percent of winning golf.

Relax? How can anybody relax and play golf? You have to grip the club, don’t you?

Like most professional golfers, I have a tendency to remember my poor shots a shade more vividly than the good ones.

I couldn’t wait for the sun to come up the next morning so that I could get out on the course again.

This is a game of misses. The guy who misses the best is going to win.

All other things being equal, greens break to the west.

The ultimate judge of your swing is the flight of the ball.

There is no similarity between golf and putting; they are two different games, one played in the air, and the other on the ground.

People have always been telling me what I can’t do. I guess I have wanted to show them. That’s been one of my driving forces all my life.

May thy ball lie in green pastures, and not in still waters.

I have found the game to be, in all factualness, a universal language wherever I traveled at home or abroad.

You only hit a straight ball by accident. The ball is going to move right or left every time you hit it, so you had better make it go one way or the other.

If the Masters offered no money at all, I would be here trying just as hard.

I hate a hook. It nauseates me. I could vomit when I see one. It’s like a rattlesnake in your pocket.

I see no reason that a golf course cannot be played in 18 birdies. Just because no one has ever done that doesn’t mean it can’t be done.

Hit the ball up to the hole… You meet a better class of people up there.

Hitting a golf ball and putting have nothing in common. They’re two different games. You work all your life to perfect a repeating swing that will get you to the greens, and then you have to try to do something that is totally unrelated. There shouldn’t be any cups, just flag sticks. And then the man who hit the most fairways and greens and got closest to the pins would be the tournament winner.

I have really enjoyed every minute I have spent in golf- above all, the many wonderful friends I have made. I have loved playing the game and practicing it. Whether my schedule for the following day called for a tournament round or merely a trip to the practice tee, the prospect that there was going to be golf in it made me feel privileged and extremely happy, and I couldn’t wait for the sun to come up the next morning so that I could get out on the course again.

I dreamed one night that I had 17 holes-in-one and one two, and when I woke up I was so goddam mad.

A well hit golf shot is a feeling that goes up the shaft, right through your hands and into your heart.

When a golfer has completed his left-hand grip, the V formed by the thumb and forefinger should point to his right eye.

Up to a considerable point, as I see it, there’s nothing difficult about golf, nothing. I see no reason, truly, why the average golfer, if he goes about it intelligently, shouldn’t play in the 70s. 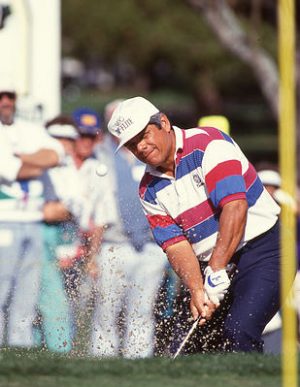